February was the second of my 2 months as volunteer co-ordinator. I had done a 2 month stint last year, but I really thought January and February would have been much more difficult than it was.

It still amazes me the amount of good will from the volunteers, many of whom volunteer week in week out.  In February we also had quite a few first time volunteers, which is really nice.

Week one saw a bit of water in the park. 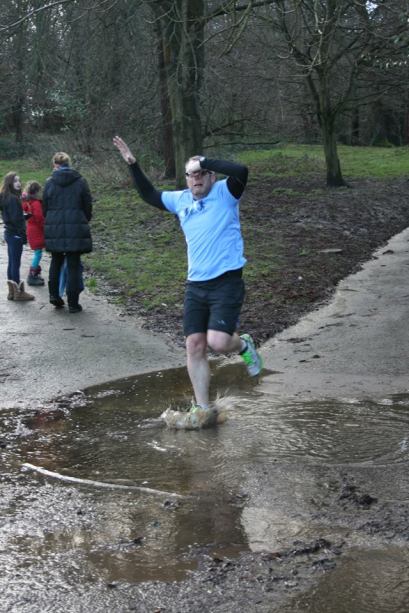 The following week, we saw lots of water. 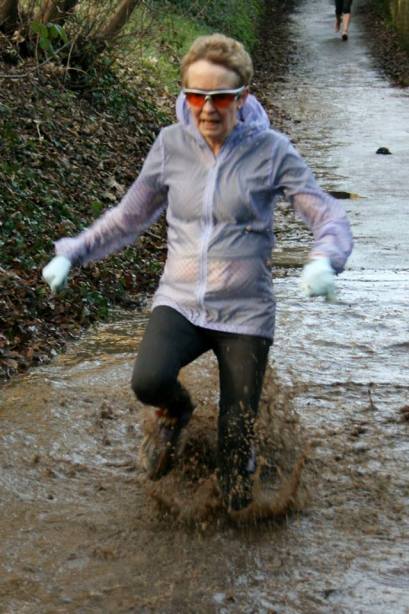 The last 2 weeks of the month were almost dry, although there was a mad panic as a fallen tree was blocking the path on Friday and the event would have had to be cancelled if we couldn’t get it moved.  Luckily, the council were brilliant and they moved the poor tree and cut branches to make it passable. During another storm on Friday night another tree came down, but luckily only half blocked the path, so the event could go ahead.

Numbers in February have been fantastic, apart from the 3rd week when we have the doubt over the fallen trees and it was half term.  Every other week we had more than 100.  I would love to average over 100 runner each week during 2014.  I think we can do it.

We also had a great really nice visitors this month.  We had a big group come over from Eastbourne parkrun.  They were a really lovely group of people.  Again, of different abilities and very friendly.  We also had a 250 t-shirt in the park, which belonged to Becky Thurtell. She visited with David Piper, who himself had a 100 t-shirt. We were also visited by the Flynn family. 5 of them ran with well over 600 parkruns between them (photos below). 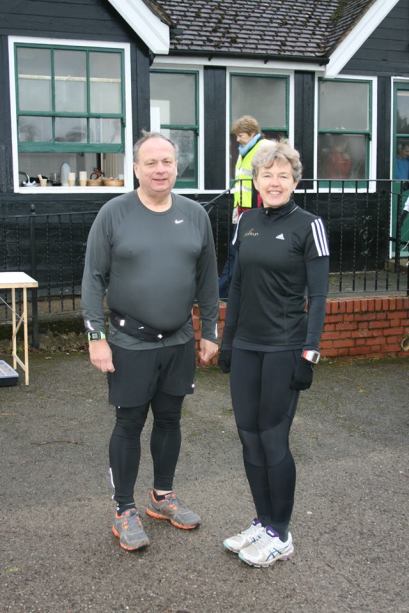 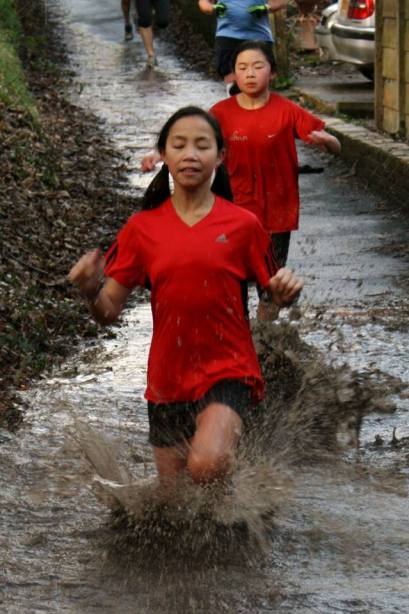 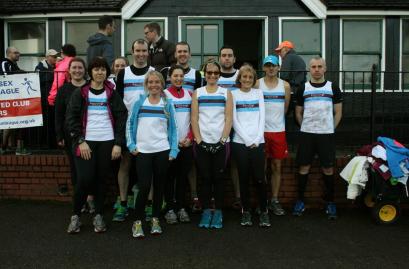 We have now ordered the pacer t-shirts.  We are going to have numbers 24 to 34 minutes on the t-shirts in order to cover the bulk of the runners.  We had planned to start this in February but it just didn’t happen. I’m really looking forward to launching pacer day.  It will really add to the event and I love seeing people have the chance to improve their achievements.

It’s been another amazing month for juniors in Clair Park. One of the reasons for launching parkrun was to help give others the chance to do sport in the way I did when I was a kid. I was amazing lucky.  I had 2 incredible supportive parents who did all they could to support me in my sporting activities and a school that was incredible.  In the last 2 week of the month around a quarter of the runners were juniors.  They run to the start line to get to the front and then rush to get to the first corner first. 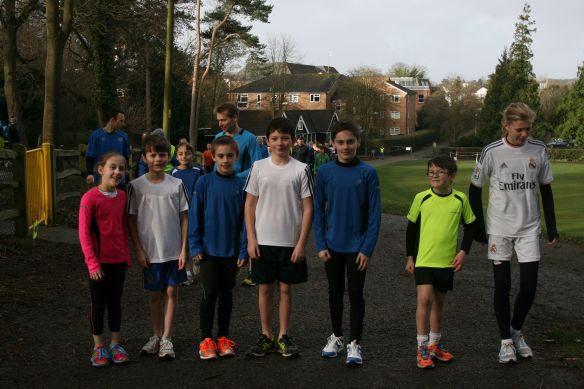 We have already handed out quite a few 10 t-shirts (Orson and Lewis have theirs in the photo above) and there are a lot more on 6, 7 or 8 run, who will get to 10 runs in the next month or so.

It does seem a bit wierd at the moment. I’m not really sure if I’m coming or going.

I seem to be tapering for one event, training for different one, recovering from another all at once.

I’m not sure that this was the best way forward to attack the Brighton Marathin in 6 weeks time, but we’ll see.

This week seemed to feel like I had the Brighton Half in my legs for most of it.  I don’t think that I was alone.  Quite a few people seemed to be posting that they’ve struggled as well.

I did a couple of slow runs during the week and then 13 miles on Saturday.  The 13 miles at almost 30 minutes slower than the Brighton Half seemed so much tougher.  OK, it was undulating and there was a horrid head wind for half of it, but even so.

I guess that you have to accept these bad ones and forget about them.  I did the sensible thing today and got out and did a short few miles and really enjoyed it.

So I guess that this week will be taper week for the Steyning Stinger Marathon.  Not what’s on the Brighton Marathon training plan, but there you go.

I’m really excited about Steyning. It’s another day out, an adventure, taking in the Sussex countryside and 26 miles of hilly off road. It’s an adventure in the same way that the Dark Star Marathon was an adventure.  I’m probably going to be on my own for quite a lot of it, the field is not that big and it’s one of those events that you have no idea what to expect (apart from the input for the club members who have done it before).

I love race weekends. I love the build up. I love putting my number on my vest and I love seeing friends posting their pre-race thoughts on social media.

I’m not even sure that I used to get this type of buzz before a game of football. Maybe I just didn’t appreciate it when I was younger and I guess I probably played a lot of games without really preparing.

I must admit that I’m losing interest in the big road events. They’re really expensive, especially as both Nick and I are taking part. However, today was amazing.

We had to get up at 5.30am for food, as the trains were not running properly.  We were due to be down in Brighton really early. 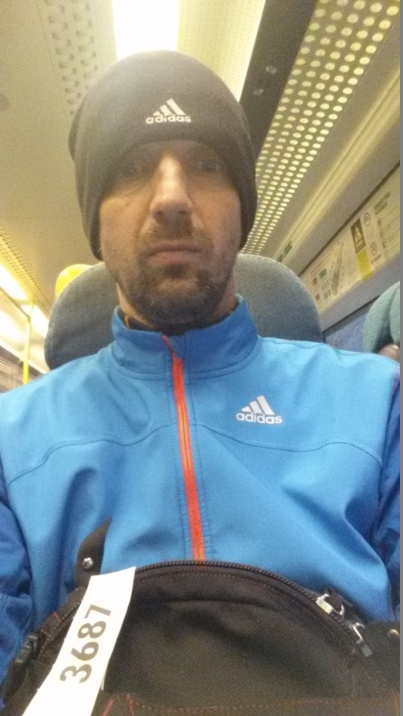 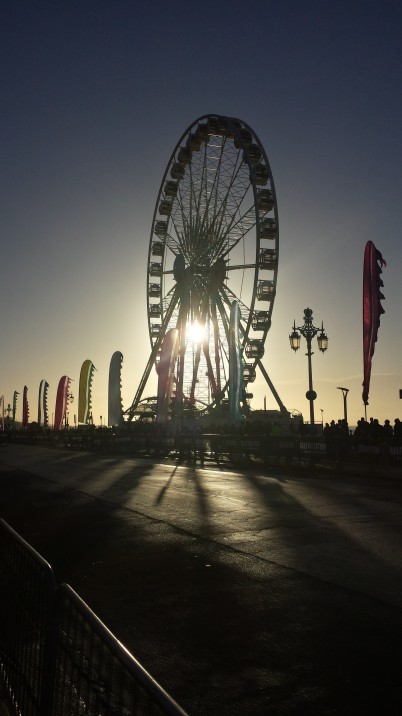 The weather has been horrendous. It’s been so windy there were 2 trees down at parkrun yesterday. Today could not have been more different.  Sunny and calm. I was totally over dressed for the weather, although, to be fair, I did dress for sub-zero temperatures.

I’d been wanting to go below 1 hour 50 minutes for ages.  I have only done it once before and that was years ago. I couldn’t help thinking that I should be able to, but my training was geared towards the longer events, so the plan was to give it a good go. Set off at 5.12 / km pace and keep it going for as long as possible.

Obviously, I soon went miles ahead of schedule. I was on for a PB at 10 miles. The wheels duly fell off as I headed back towards Brighton after the turn at Hove Lagoon. Not badly though. In the past, things would have gone seriously wrong.  I’m mentally stronger now and I knew I’d still go under 1.50 and that was what I did. 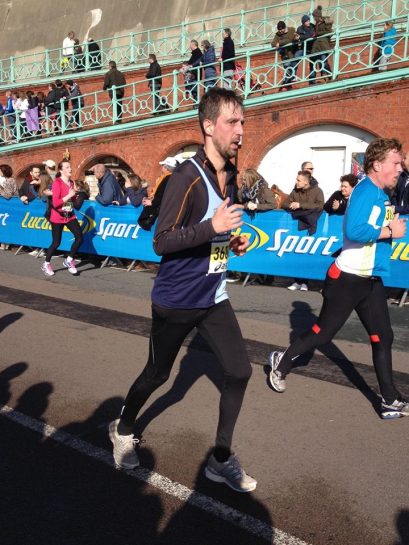 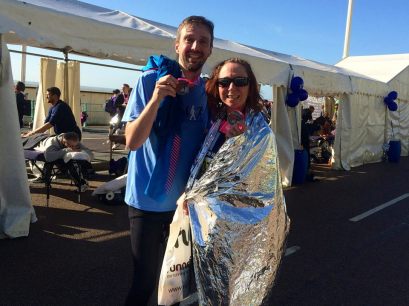 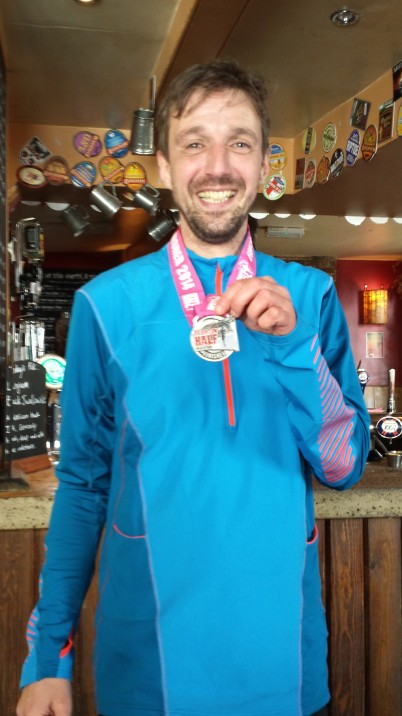 It was walking back to the pub for a quick blackcurrant and soda that one of the true meanings of these big road races really sunk home.

There were still lots of people making their way to the finish line. Some of them with times pushing up towards 3 hours and over. For them this is their Everest. In the same way that my goal was to go under 1.50, their goal was to finish. I can’t help but think that their achievements today were so much greater than mine. Most of them are completing the event for charity, probably for a deeply personal reason. Respect to every single one of them.

While walking back along the seafront, Nick and I talked about the last time we were down there for a race, the Brighton 10k last year, when I didn’t run, but took photos for the club. As we were heading home, the guy in the photo below ran past us. 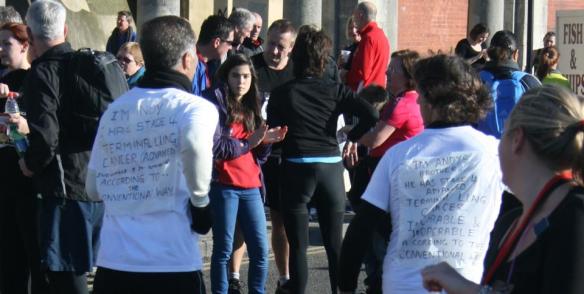 This must have took an amazing amount of strength and the day must have been so emotional for him and his brother who was running with him. Everyone stopped and cheered him. I wonder what happened to him. Whatever it was, I think that he made a real impression on a lot of people that day.

Back to today. Burgess Hill Runners showed their true colours.  Over 60 of us ran. There were blue shirts everywhere. A massive range of times from 76 minutes to 2 and a half hours and above I think.  Again it was some of the performances further down the field that caught the eye with numerous PB’s.  Caz completed her first half and went under 2 hours 30 minutes.  Her very short running journey should be an inspiration to anyone who wants to start running and thinks they can’t. 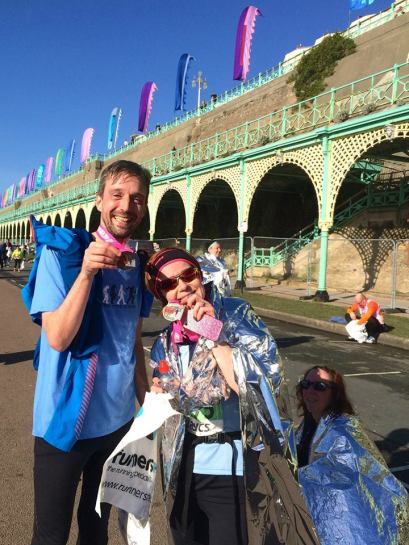 When we met after the race she was in tears and I thought it’d all gone wrong.  It turns out that she was just so happy.  Fantastic.

Nick went under 2 hours.  Woo hoo.  She just missed out at Bexhill last year and given the fact that she’s been under the weather and had a bit of a crisis of confidence, this was a great performance.

So there we go, another fantastic inspirational day. The type of day that makes me happy.

Two weeks until the Steyning Stinger Marathon.  Bring it on.

I’m not going to write about parkrun every week. To be perfectly honest, it’d get a bit dull.

However, if anything out of the ordinary happens, then I will make an exception.

The weather has been appalling for the last few months.  More rain than I can remember falling before.  When we first started to plan parkrun around this time last year, we visited Clair Park and it had been raining heavily.  The section at the bottom of the course was totally flooded.  I imagine that it is down to the drains getting blocked following the leaf fall.

So I guess what greeted us was to be expected.  I had no particular role this week, so I was free to take some photos and I was lucky that it happened this week. 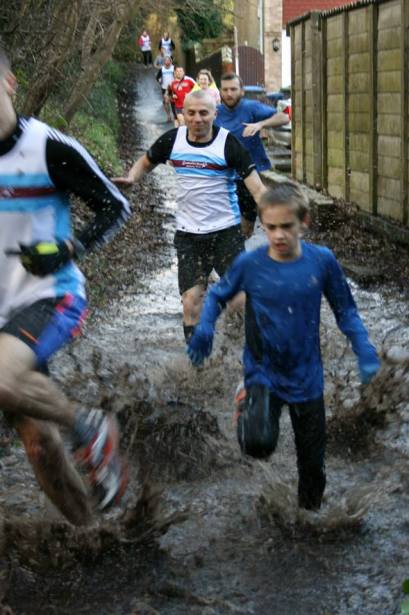 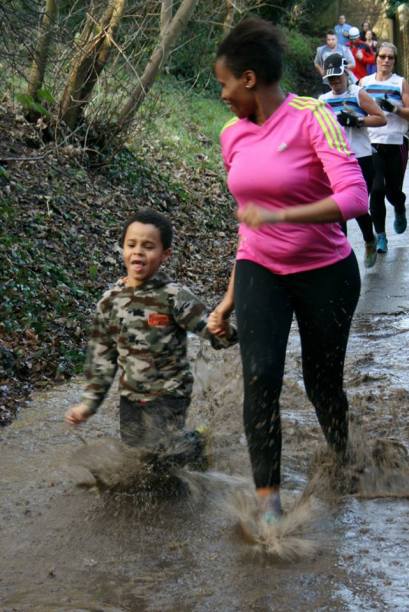 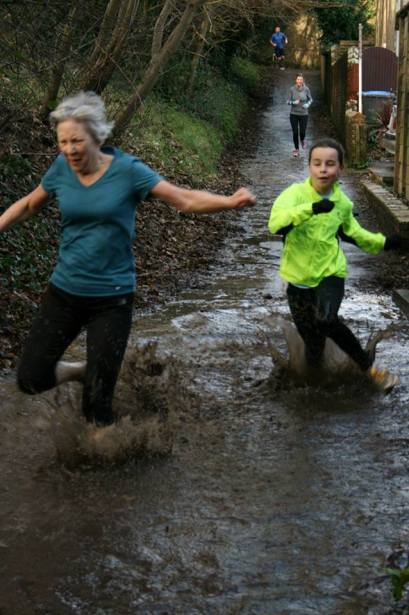 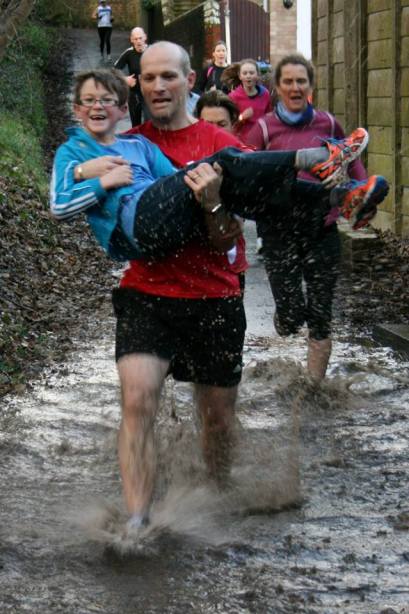 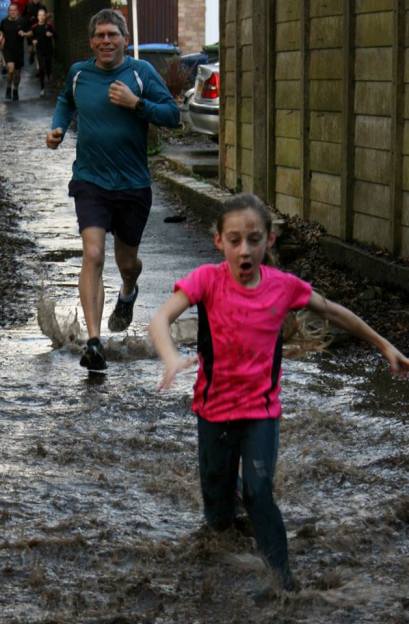 I did wonder how people would react to this, especially the juniors. It was amazing.  Everyone got stuck in and seemed to relish it.

There seemed to be a real buzz afterwards today, as people had something extra to talk about.

The power of parkrun does not and hopefully will never cease to amaze me.