Sunday was the Spitfire 20 event in Surrey.  It is based at the Dunsfold Aerodrome, which is where Top Gear is filmed.

There are 2 races on the day, as the Spitfire 20 is held at the same time as the Tempest 10, with the longer race being 2 laps of the 10 mile course.  Both events set off from the same place at the same time.

This was planned as the last pre-Brighton run and the idea was to go out at 6 minute kilometres, which is my target pace for Brighton.  I had been contemplating not running as my back was playing up, but to be fair it didn’t cause me any issues.

The weather was warm (hot by recent standards) and I ran in shorts and a vest. This is totally unheard of.  I have run many races in totally inappropriate clothing over recent years and suffered due to the heat.  This is a hangover from being the skinniest kid at school and hating this fact.  At 43, I should have really got over it by now.

The first 4.5km are in the aerodrome.  It’s pretty flat and very open to the elements.  It’s pretty tough to stay slow and not speed off, as half of the runners are doing half the distance you are.  On a windy day, this section would be tough.

Once you leave the aerodrome, you are out on the roads.  The roads are not closed and it must be said that it was a little dangerous on the first lap, as we were close together and the 10 milers were mixed with the 20 mile runners.  On the second lap there were half the number of runners and everyone was much more spread out.  If you don’t feel comfortable with cars passing you (albeit slowly) while you are running on the road, this may not be the event for you.

There is a steep hill at just before 5km just after you leave the aerodrome, which lasts for 200m.  There is then around 400m of descent before the long climb. Over 2.5km you climb just over 30m.  It’s a long drag and some people do walk. 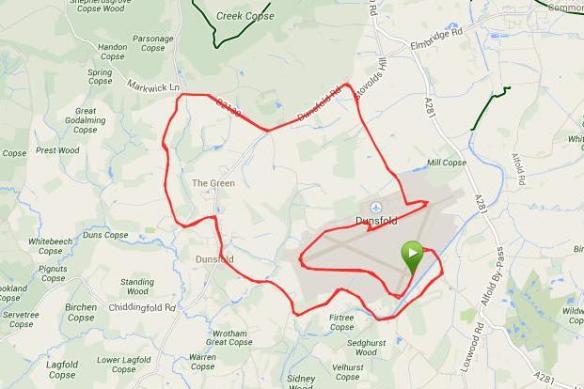 After that you turn off onto much quieter roads most of which is either downhill or flat with just 2 nasty small climbs at 10.5km and 12km.  The countryside is fantastic, not dissimilar to the Barns Green Half.

The atmosphere was very good after the long climb.  There was a group of ladies from Dartford Road Runners who did not stop talking.  I also had a chat with a couple of people from Arunners about the West Sussex Fun Run League and a lady from London who was an avid parkrunner.  This made the miles fly by (a little too quickly to be fair).

As we entered the aerodrome at the end of the first lap, the 10 mile runners went over the finish line and I started on my second lap.  I was nearly 3 minutes ahead of what I had set out to do.

So the second lap went well until I hit the downhill section after the long drag at 25km.  I felt good, so decided to speed up.  Stupid error.  I got to the village of Dunsfold and at 28km ran out of juice.

With 4km left I was helped home by one of my fellow Burgess Hill Runners, typifying the tag of ‘The Friendly Running Club’.  I slowed down dramatically and got home in 3 hours 9 mins.  Not exactly the confidence boost I was hoping for, but lessons will be learnt for Brighton.

Speeding up was a stupid idea and I’m still struggling to fuel and sleep during the 2 days before an event.  My excitement/anxiety are still getting the better of me.  Fingers crossed I can resolve this before Brighton.

I would certainly recommend this event to others, with the caveat of the road sharing.  The feeding/watering stations are well manned and the marshals on the whole were excellent and very encouraging.  There is a large range of abilities as people are doing there last pre-marathon long runs. This event definitely compares favourably with the Worthing 20, which is one of the other big pre-marathon events. 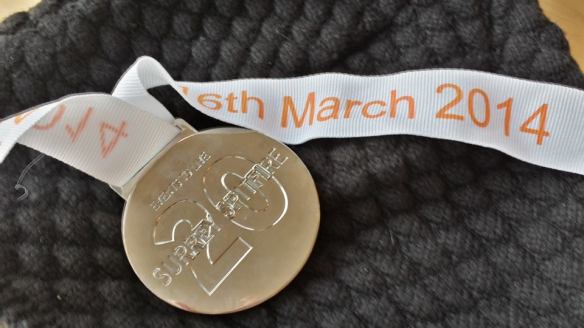 It’s a really nice medal for those who are interested that kind of thing. Big, shiny and heavy.