This was the message on one of the signs that was out of the course on the Brighton Marathon. How could you not be inspired by that?

The Brighton Marathon was special on many levels. The atmosphere was amazing. The crowds came out in their thousands and I got to run a marathon around my adopted city and along the seafront that I have trained on hundreds of times.

This race was my first flat marathon since I joined a running club and started to recieve advice from coaches and experienced distance runners. In my 3 London marathons I made huge mistakes in the training, preparations and on race day.

I struggle to sleep the night before a big event.  I even get up 3 hours before parkrun each Saturday, as I’m so excited.  Surprisingly I slept through until 5.30am on Sunday morning and was only woken up by the sound of one of the cats wrestling with a fur ball.  Great timing Ozy.

So the promised rain didn’t arrive (apart from the 10 minutes before we set off in Preston Park). This was so good, as we waited for ages to get out of the station and were in Preston Park for some time before the race was due to begin. 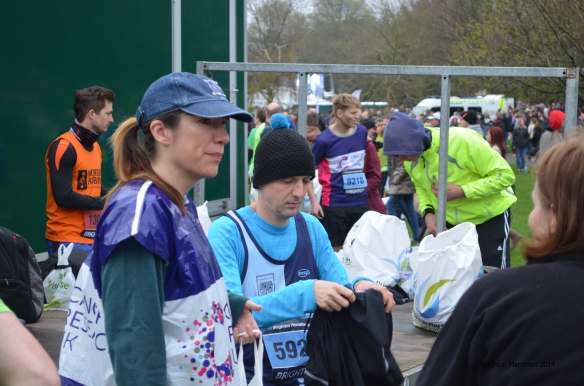 So we crossed the start line.  I shouted a greeting at Paula Radcliffe and off we went.  Slowly.  The first 10 minutes of the race were pedestrian. Lots of stride chopping as people stopped to hug friends and chat. I soon found my target speed and settled into a rhythm.

The first half of the race flew by. The section through the city centre was very well supported, as expected. However, I wasn’t expecting the crowds on Lewes Road at around 7km. This was where the first turn round point was. Some people are not fans of these. I am. I love cheering on people that I know (and some I don’t) who are running in the opposite direction. There are 4 such double back sections on the course. 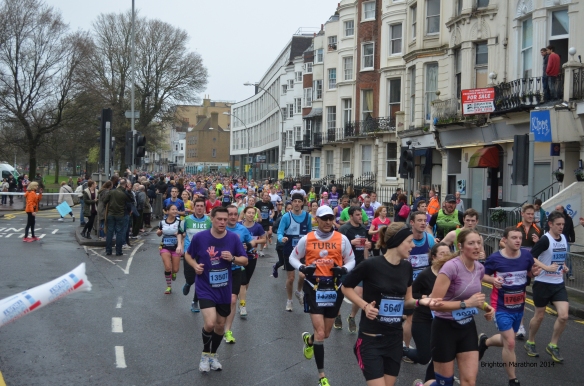 At kilometre 9 you climb through Kemptown then down onto the seafront to head east towards Ovingdean. For the most part of this section, about 10km in total, you can see runners on the other side of the road heading in the opposite direction. It inspires me to see the fast runners, especially if they are wearing a vest I recognise.

So, as you head back into the city centre towards the half way mark, the crowds build again. It’s all pretty noisey. At half way it was a breeze, I’d done what I set out to do. I’d planned to get to half way in 2 hours 6 minutes and I got there just a minute under that. 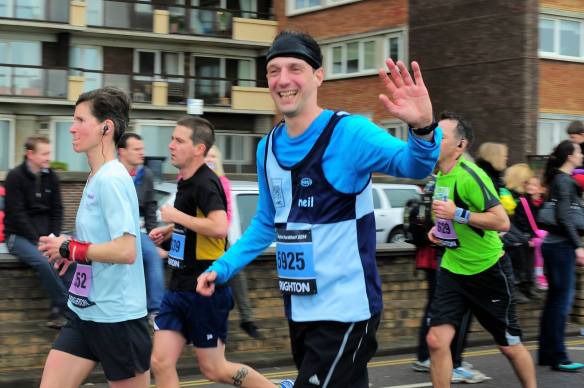 The reason for sticking to this plan was some very sage advice from several people over the past few months. It was cemented a few weeks ago when a couple of parkrunners and experienced marathon runners told me that a marathon really starts at mile 20, so I’d best not be knackered when I got there.

So the next stage was Church Road and New Church Road through Hove and out to Portslade and back. Several people had said that they hated this section as it was dull. There were so many people out of the side of the road, people having food and playing music. One sign said ‘Well Done, Random Stranger’. Says it all really. It was fantastic and the atmosphere was superb. The people of Hove really came out in force.

At kilometre 30 you hit the seafront again, heading west towards the ‘dreaded’ Shoreham Power Station. A lot of people hate this section, as you are heading away from the finish and in previous years it has not been well supported in this area.  Again, there were people all along the route. At the end of Hove Lagoon the crowds got thicker and the music louder. At the power station the crowds were amazing, deeper and more vocal. So many people calling out your name. So many that I even missed people I knew.

After the power station you hit the home stretch at kilometre 37. That’s 5km to go. That’s a parkrun. I kept saying to myself, it’s only a parkrun. It may seem that the Palace Pier is a long way in the distance, but it’s only a parkrun away. And it’s a flat one. And there’s a shed load of people cheering you on.

I was expecting the crowds on the coast road at the finish, but I was not expecting what met us on the Hove prom. The spectators seemed to form a funnel and the noise was really intense.

Due to the fact that I’d hit the pacing as planned, I was still strong and overtaking lots of people at this stage does the confidence a world of good.

As expected, the short incline at the Peace Statue felt like a small mountain, but after that, it was all downhill to the finish. I speeded up and cheered myself down the last section, punching the air and loving every second.

4 hours 9 minutes and 12 seconds is around 11 minutes off my previous best.

The 5km splits are below:

That’s a negative split by 26 seconds for the second half marathon.

Even as a plodder, it’s important to plan well and carry out that plan. I’m so pleased with myself.  I may sound excessively happy, but this is just the pride in the achievement. Marathon number 3 done in 2014.  All 3 have been very different.

I must admit that this one made me pretty emotional at times. I passed a guy at 17 miles who had a message written on his back saying ‘this one’s for you Dad’. He made me cry. I haven’t gone through anything to warrant wearing a t-shirt like that and I hope it’s a long while until I do. It also got a bit emotional as I sat down to recover in the finishing area. I’ve come a long way in the last 2 years. I haven’t felt this well for some time and the focus of these events has played a major role in that.

No time to sit around recovering from this event though.  3 Forts Challenge in 4 weeks.  27 hilly miles here we come. Then it’s the Green Belt Relay. And then, who knows?

In the meantime, a nice pint of beer and relax. 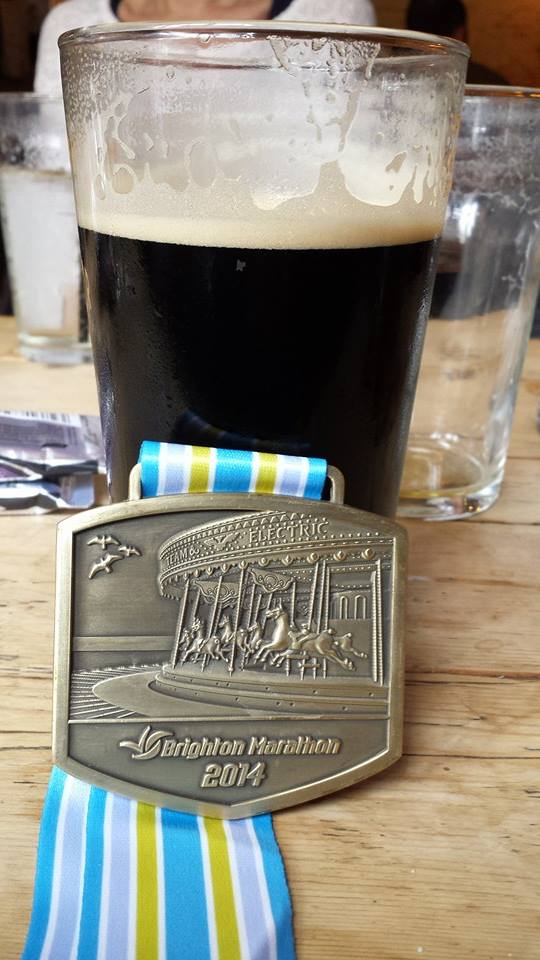 Photos courtesy of Jon Lavis and Caz Wadey.  Thank you as always.