When the alarm goes off at 5.30 on a Sunday morning, you know that something special is about to happen.

To be fair, there was no real need for the alarm clock as I’d been awake for a while in anticipation for my longest race so far, the Downslink Ultra, which totals 38 miles from Guildford to Shoreham by Sea on the coast near Brighton.

The weather forecast had promised near perfect conditions, although I hadn’t expected to have to scrape thick ice off the car before setting off.

The race starts at the church on St Martha’s Hill near Guildford.

We were met by the organisers at the car park, before heading up the hill for registration and then further up the hill to the start.

The 10 minute uphill walk to the start was well worth it.  This is definitely the most spectacular start to an event I have seen. 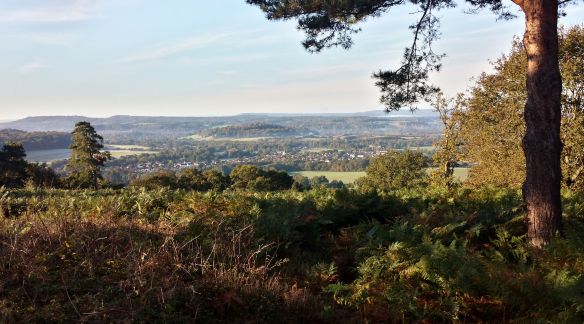 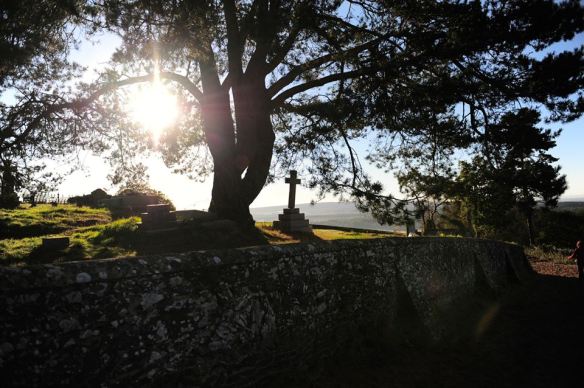 Burgess Hill Runners were the most represented club at the event with 7 of us starting (and finishing) the challenge. 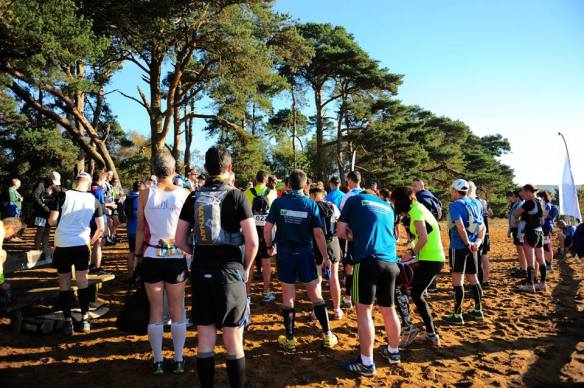 So, pre-race brief over and photos taken, we set off bang on 9am. 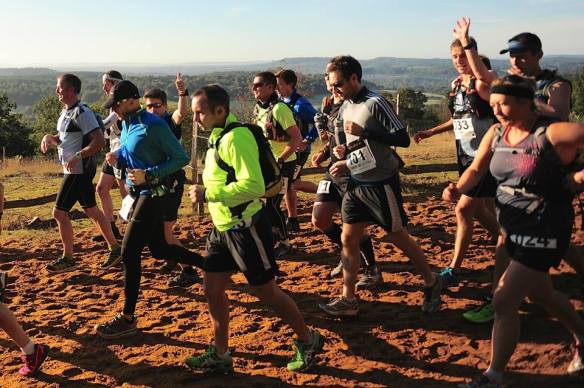 As you can see from these photos, the start is on sand, as is the first mile or so.

Luckily it is almost impossible to set off too quickly as the downhill section is steep and tricky.

Once you are onto the relatively flat section, and, to be fair, most of the course is either flat or downhill, you can find your rhythm and settle in.

There is a forest section for about 4 miles.  This was really enjoyable as I hadn’t run this section before.  It was very similar terrain to sections of the Farnham Pilgrim.

From there on, it is almost all flat or downhill.

The Downslink path is lovely.  For the most part, all you can hear is bird song, the sound of your own trainers and the greetings of the passers by.  The course provides very pleasant surroundings and lots of people out walking their dogs and riding their bikes.  Pretty much perfect if this is your first Marathon plus distance event.

As you would expect from the Sussex Trail Event team, the aid stations, which were at regular intervals, are very well manned, well stocked and very well organised.  You couldn’t ask for more really.

I am obviously slightly (very) biased, but no aid station was better than the one at the Cat and Canary pub in Henfield at just over 28 miles, which was run by Burgess Hill Runners.  The welcome was warm, the encouragement in abundance and the food excellent.  There were even roast potatoes.  This is just the boost that you need, as many people were entering into unknown territory at that stage. 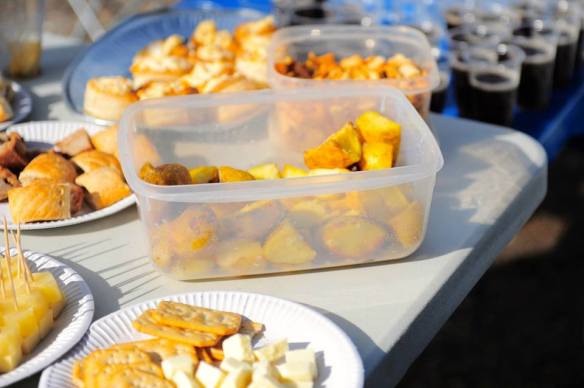 The end of the event is by the Adur Outdoor Activity Centre in Shoreham.

One of the beauties of the Sussex Trail Events races is the fact that they are very low key.  They are organised by runners for runners.  The finish personifies this.

Along with the supporters waiting for their loved ones to arrive, there are just 2 ladies recording the finishing details and the Sussex Trail Events flags.  At least the timers had better conditions than they did for the Dark Star Ultra in January.  Inside the building, however, there are excellent facilities to shower, get changed and a free veggie chilli is provided.

As for my race, it couldn’t have gone better.  I had a target finish time range of between 7 hours 10 minutes and 7 and a half hours.

For the first half marathon I had the company of Philippe, who was competing in his first Ultra event.  We had discussed the absolute necessity to set off slowly. 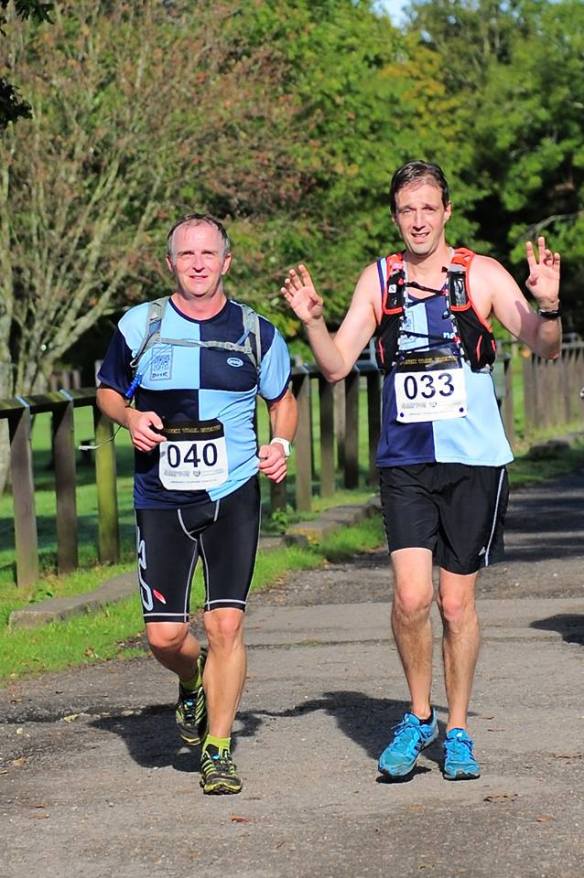 We were a little quicker than hoped, but it pretty much worked.  Only 2 of my quickest kilometre splits were in the first 20 kilometres.

Being with someone desperate to slow down and constantly using your watch to achieve this was hugely important.

There was a long downhill section just after the first half marathon and this is where I left Philippe to his own devices.

I actually speeded up in the second half marathon.  I did the first one in 2 hours 23 minutes and the second in 2 hours 19 minutes.  This was almost certainly a little too quick, as the last 10km proved, but I was full of confidence and was fuelling and hydrating really well.

Hydration and fuelling is something that I have always struggled with.  This hit home at the Track Marathon in May.  Even though I passed the aid station every 400m on the Track Marathon, I didn’t eat or drink enough.  On the Downslink, I was encouraged to take my time at the aid stations by the fact that lots of other runners were doing the same thing.  Without a doubt, taking the time to fuel will help later in the race and is essential. 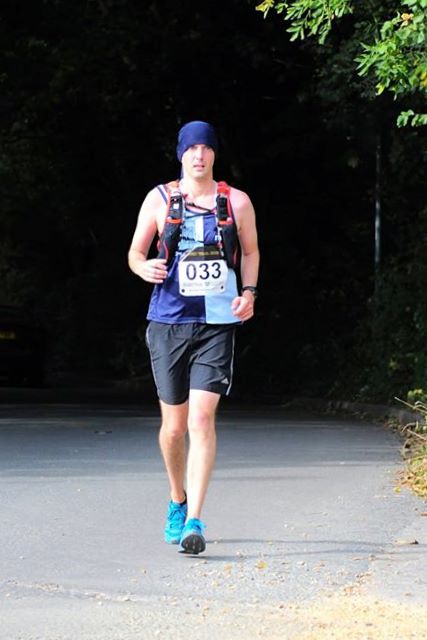 If I describe the last 10km as having the wheels fall off, I would be doing myself an injustice.  However, they were tough. Only once did I drop below my initial target pace though and that we due stopping at the aid station at Bramber.

I managed to re-assess the situation at the aid station.  I was feeling a bit sick and cramp was trying to get me.  I tried to eat some salty crisps, but had to ditch them and get on with it.

Pretty quickly I hatched a new plan as I could see that I may go below 7 hours.  For every km from Bramber to the end I ran 800m and walked 200m.  The 200m was a treat and this helped to get me through the first 800m and I knew that this would guarantee me getting under 7 hours.

It worked.  I can’t believe it.  I went into the event with a lot of confidence and more self belief that I have had for some time, but I didn’t expect to go sub-7. 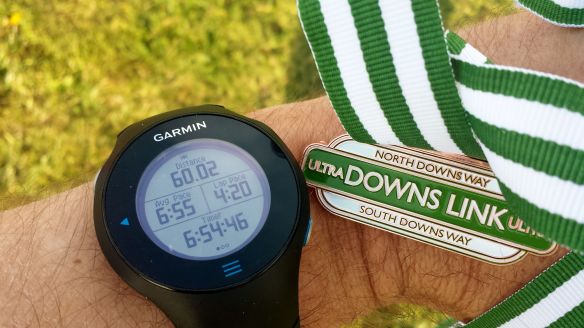 So there we go then.  Mission accomplished and some more.

On the day, it was incredible to have Burgess Hill Runners out on the course and at the aid stations to support.  You have once again proved what an awesome club and an amazing group of people you are.

Finally, the support of Nick on the day and throughout the training has been the best xx.

I hope that this proves that Ultra distance events are definitely within the range of average runners like me.  The sense of achievement is amazing and will never go away.

Finally, to the boys at Sussex Trail Events, you are brilliant.

And finally, this event is so good, it makes you do this…………

The photos are either mine or stolen from Caz Wadey (thank you).