So, it was time for the Bovington Marathon.  The last of the White Star Running events for this year, the inaugural event at this location and my second marathon in 2 weeks.

During the week leading up to the race, Andy (Race Director) was posting the usual videos of the venue and the course. On this occasion we were treated to the warnings of the water obstacles as well as a glimpse of the wonderful countryside.

Somehow, WSR managed to get permission to use the Ministry of Defence tank training site in Dorset, home county for most of their races.

Our weekend started with a parkrun (an attempt to get Nick to her 50th parkrun around her 50th birthday), followed by a 2 and a half hour drive over to Dorset and the Premier Inn in Poole.

By 5.30, the 7 Burgess Hill Runners who were running the half and the full marathon the following day had started their alternative Christmas Party, as this race fell on the same weekend as the real party back home.  Probably not the best prep in the world, especially as we were still in the pub at 10.30. 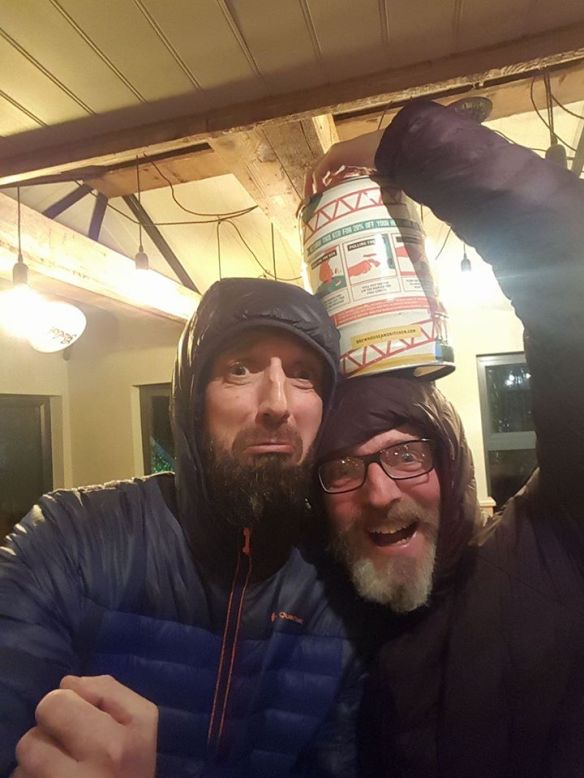 So, 6 hours sleep later, it was time to get up.  It was still dark outside and my body was asking why I’d had 6 pints of local ale the night before.

Time for a bit of make up and we were off on the 30 minute drive to the start. 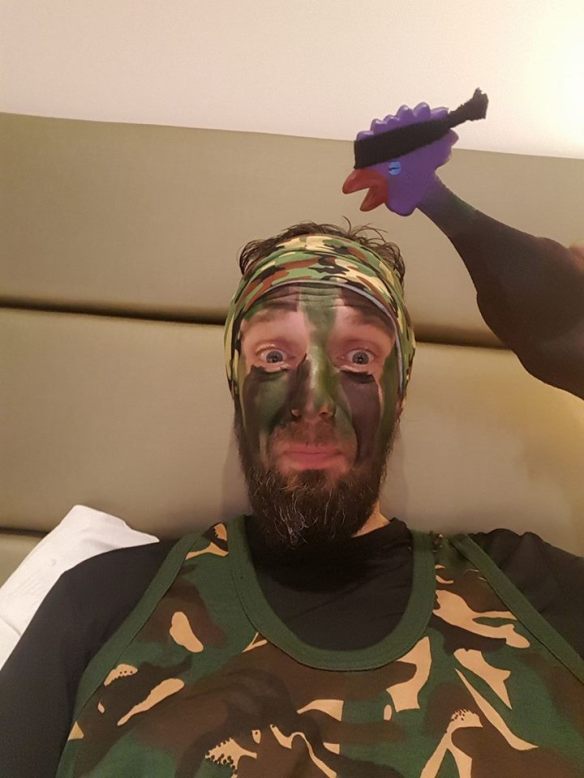 It was really foggy outside, which meant that it was really cold, adding to our reluctance to summon the energy and the will to leave the warmth of the car.

We had no idea what to expect from the course as it was the inaugural event, although mud, hills, tank tracks and shin high water obstacles were inevitable and it certainly didn’t disappoint on any of those fronts.

It was possibly the most complicated course layout I have ever seen, but the hills didn’t offer huge amounts to fear (don’t think that makes it easy – mud makes up for hills).

At 9am, we’re off, but not before the race brief and safety announcements.  This is the first and last race brief where I will hear them say ‘if you see anything that looks like a grenade, don’t pick it up as it probably is a grenade’.  Followed by ‘have fun – don’t die’.

The first couple of miles are pretty flat and then you come across the first water hazard. 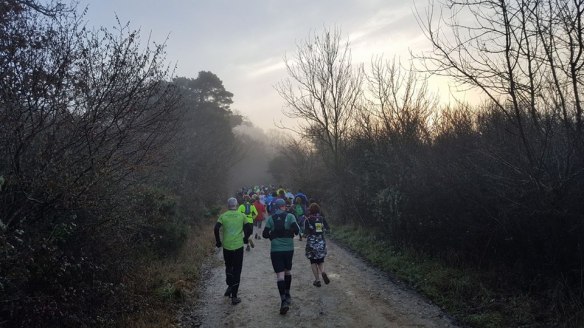 There were 2 options.  Queue and go round the edge or straight through the middle.  No prizes for guessing which one I took.  Splish splosh.

It is then pretty much uphill until the 10k mark.

I really wasn’t expecting it to be this lovely.  The forest was amazing and the fog was perfect for taking lovely pictures.  I was just lost in my own little world of loveliness. 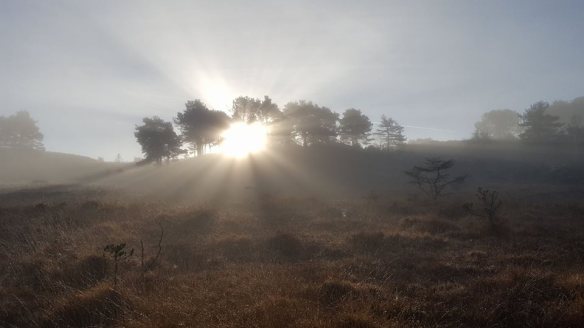 Once the hill is finished, you hit the tank tracks and the open spaces with the tanks roam in their natural environment.  This is tough.  It’s muddy with close, gentle undulations. 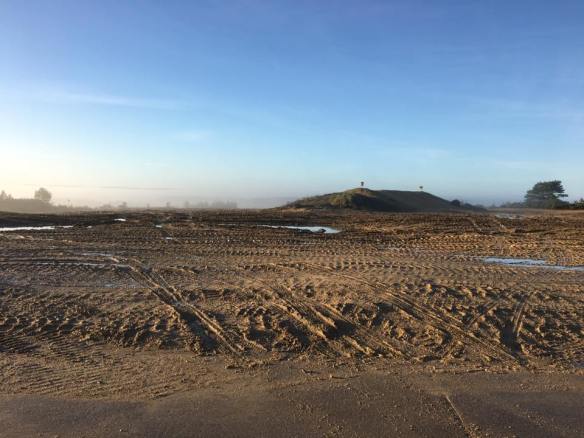 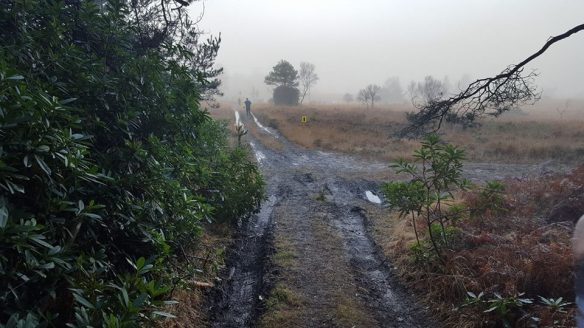 Of course, there is also the odd tank shattered around here and there.  This is a MOD training site after all. 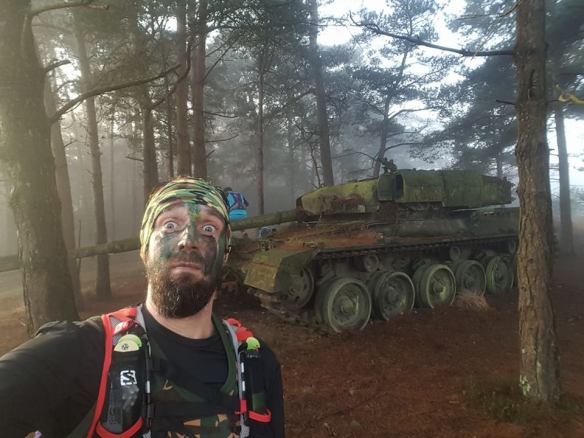 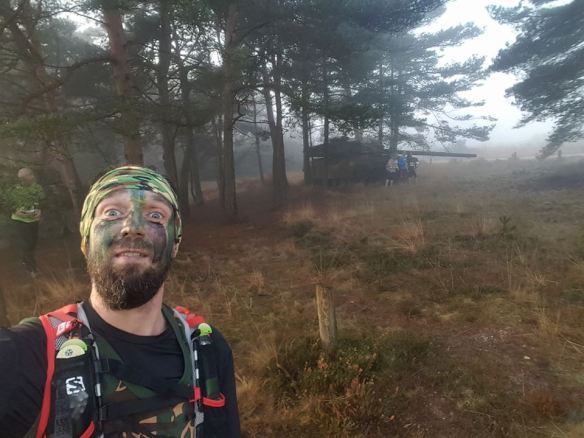 So this is me at the end.  Being the tree hugger than I am, I was very pleased to see the ‘Make Cakes Not War’ sign.  This being WSR, the medal is huge and very impressive. 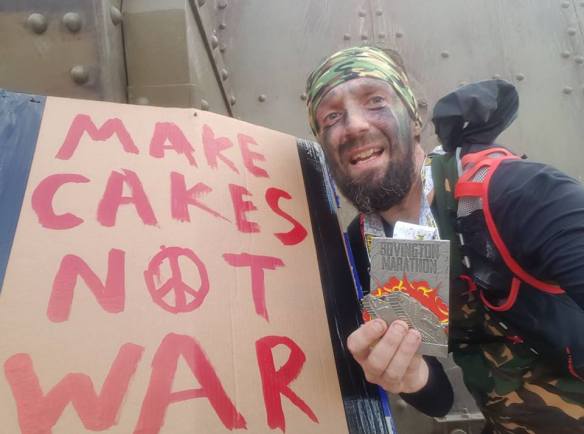 I think that this was probably the best trail marathon that I have run this year, maybe ever.  Not a negative split, but not far off.  The last 3km were in the top 10 quickest km’s of the whole race, which means that I got the pacing right and there was still something left at the end.  I finished in 4 hours 47 minutes.

I did suffer from number 2 toilet problems again.  3rd race in a row.  Not too bad, but still enough to want to sort it out.  These 3 races have been the first 3 that I have used Tailwind on, but maybe it had something to do with the spicy bean burger and the gallon of ale I had on Saturday night.

Again I fuelled on Nakd bars, mixed dried fruit and Torq jels (jels added on this race), as well as Tailwind.  Oh, and the vegan cake at 2 of the aid stations.  Mmmmmmmmmm.

From the comments on social media, it appears that everyone had a great day.  A few people got lost (as did I), but it doesn’t matter.  You don’t win awards like this without doing something right and WSR do pretty much everything right.  Trail marathons are about seeing the countryside, pushing yourself, meeting people and having fun.  Bovington delivered on all fronts.

So that’s the end of my running year, apart from a couple of parkruns and a few steps closer to my 100 t-shirt.

This year has seen another big step forward.  I completed my first two 50 mile races, including my first Centurion race.  There were another 7 marathons, including back to back marathons at Bad Cow.  Sussex Trail Events and White Star Running have formed the back bone of these events, mainly because they’re the daddies and they make me happy.

A huge amount of thanks go to everyone who has made 2016 so brilliant.  All of the coaches and fellow club mates who have advised, encouraged and pushed me along the way.  To Philippe for being just awesome and being the best company throughout many of the races this year.  To Jon Lavis (at Sussex Trail Events races) and Rob Hannam (at the White Star Events) for taking such great photos and helping to build a memory bank, as well as helping to make a much more interesting blog.  And to Nick for being herself in all her amazingness and inspiring me to go quicker so that she doesn’t beat me.  The 2 photos below are my favorites of the 100’s taken from this year.

Next year sees the first challenge early on in January with Country to Capital, then the SDW50, Ox50 and SDW100, with several marathons scattered around in between.

Still hoping my knees don’t give up soon.

Have a great Christmas and a Happy New Year and please be kind to animals.