A 3am alarm call on Thursday morning can mean just one thing. It’s time for an adventure.

This one is Transvulcania. 47 miles up and around a volcano on the island of La Palma, the smallest, most undeveloped and most beautiful of the Canary Islands.

As I sit on the plane (first flight in around 12 years and very nervous), I’m reading the guide to the island. The first line of the introduction is ‘The steepest island in the world, the deepest crater, the clearest skies; black beaches, blue skies, high mountains and vegetation that is literally flamboyant.’  Before setting off, we were feeling a mixture of excitement and intrepidation. The guide has heightened these feelings even more.

Registration was easy. Well kind of. When you get there, it’s dead easy. No queues, lots of helpful volunteers with many of them speaking English for the non Spanish speakers. The expo is small but perfectly formed and it’s great to see them  promoting ecologically friendly products manufactured locally. 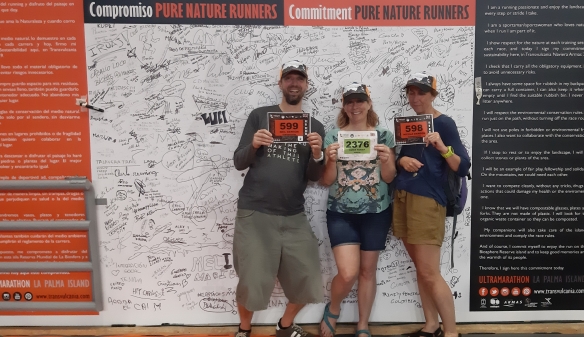 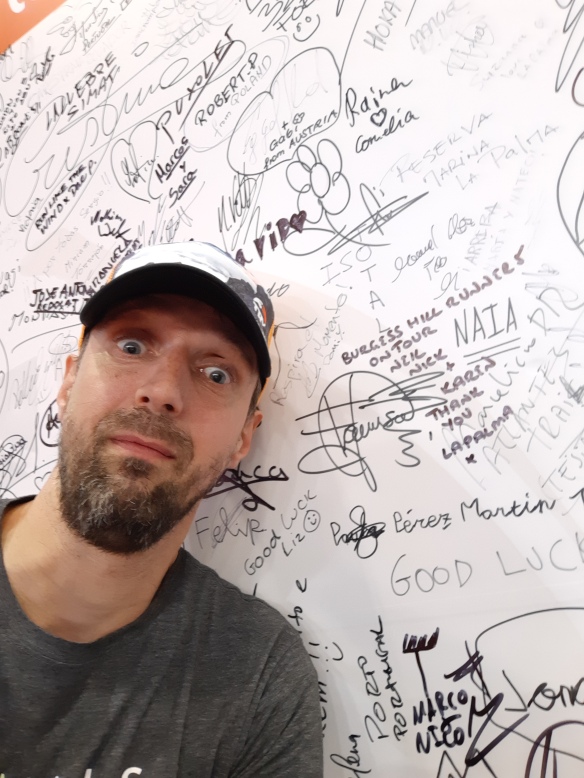 The issue that we had was actually getting to the expo. Now, we’re on a tiny island off the coast of Africa. The climate is amazing, the food fantastic, the scenery among the best I’ve ever seen. So why rush around and why have a bus service that runs regularly?  The service between the airport and the capital (linea 500) only runs once an hour late in the afternoon, and we just missed it, having taken around an hour to find the correct bus stop. Once in the capital, Santa Cruz, we took linea 300 over the volcano to Los Llanos, a 45 minute drive to where the expo and registration is taking place.  But why so long, for such a short journey? Well, that soon became obvious. I have never heard the engine of a bus growl like this one.  For the first 20 minutes it didn’t get out of second gear, climbing some of the steepest hills I’ve been up (it wasn’t lost on us that we’d be climbing these hills on foot 36 hours later).

The flora changed from prickly pears, vibrant flowers and sun scorched grasses to ferns and forest, the closer we got to the clouds that engulfed the tops of the hills. Then, it was white out. You could see nothing below, which may not have been a bad thing, given the lack of safety barriers and the proximity of our 52 seater to the edge.  I thought that landing of La Palma airport with its stupidly short runway was a bit of a worry, but this was more white knuckle.

Registration done and that was it. All sorted for a rest day on Friday before an early start on Saturday.

The race brief was interesting on Friday evening. It was brought to a hotel near us and was preceded by a round table of 20 or so of the 140 elite runners taking part in the various races. The enormity of the event starts to kick in. The best runners in the world are here. The race brief is long and unlike any I’ve ever seen before. Each section is delivered in Spanish, followed by an English translation. There is a large screen with graphics that accompany the brief, which goes into great detail about safety and the level of support if anyone gets into trouble. They outline the most dangerous parts where the path is around a metre wide with no safety barrier and a sheer drop off the edge. Karen met a runner at the start of the marathon who went back to her room and took out life insurance immediately after the briefing.

So, the 2.30 alarm goes off, which isn’t that welcome, as it’s the second time we’d got up so early in 3 days. A quick breakfast and then a quick walk to the bus stop, accompanied by a lovely chap from Quito, Ecuador, especially for the race.  There’s a queue and it needs 5 buses to get everyone there just from our part of the island. It’s a 45 minute journey and it’s probably best that it was in the dark, as I imagine we were flirting to cliff edges again.

We’d waited for this day for so long. It had become a bit iconic in our house. We had watched so many videos and read a lot of blogs and here we were.  At the lighthouse, then at the start line.  The start of our most difficult running adventure.

Beware.  It was cold and windy, so don’t  get fooled by the daytime temperatures.

The announcers spend 45 minutes whipping everyone up into frenzy as the countdown clock projected on the wall of the cliff approached the time we had been waiting for.

Here is a link to a video of the start. The atmosphere is great and the countdown at the end is something I’ll never forget – https://youtu.be/lqFAT7RtyMM

And then we’re off.  There no 2 ways about it. We knew that this was going it be a struggle. From very early on, I  had an eye on the cut off and the first point where the organisers can hook you. It’s at 25km and 5 hours. A generous cut off you may feel. Don’t believe a word of it. Most of that 25km is up hill, with over 2000m of elevation gain (twice the height of Snowdon). And the hills are not the half of it.

After around 2km of road, some of which we ran, we had to queue to get off road and start the hike up the sand covered 2 man wide trail.  The black sand glistened in the light of the head torches as we snaked our way up the mountain until the path widened and became more runnable for a while. Quite amazingly, people were out on the mountain side before sunrise, greeting us with calls of ‘Animo’ and ‘Campeones’.

We reached the first aid station at Los Canarios and the whole village was out on the streets, bunting up, banging those plastic air filled tube bangy things together. This is their Tour de France. They even have a plaque to commemorate the winners of the male and female races each year.

If you thought that the first 7km was tough, from here to the 18km point is where it gets serious. Almost none of the uphill was runnable for me, some of it was hardly walkable and the downhill was almost non-existent. Most of the underfoot conditions were sand. Lovely black volcanic sand, with the odd section of uneven cobbles and forest path.  When I say lovely black volcanic sand, I mean shitty horrible black volcanic sand. In the nicest way possible, obviously. There’s no traction and as you push off, your lead foot just slips back down the hill. The views, however, are stunning.

With each corner that you turn, there is a desperate hope that you will find the relief of a runnable sand free trail, but no. It just keeps on giving. Around every corner there was another climb, each bigger than any hill I’ve ever climbed before. Each covered in sand.

With every step that went by, I realised that I wasn’t going to make cut off at 25km. Surprisingly, it didn’t bother me too much. This was just amazing. The words of my wonderful running buddy Stephen Delaney were ringing around my head. ‘We’re so lucky to be doing this’, he told me as he paced me on the South Downs Way 100. As my average km time rose from 10 minutes per km to 11, 12 then 13, it was definitely time to just make the most of being in this wonderful place, as the chances of beating cut off disappeared over the horizon (or a big sod off mountain).

This is the hill that finally broke me, although luckily it was the last one before the relatively easy descent into Refugio el Pilar (the starting point for the marathon), where my Transvulancia experience would come to an end. 25km in 5 hours 23 mins. This climb finished at the top of the peak in the middle of the picture just to the left of the tree and the last picture was taken near the top looking down at the aid point, which is where the first picture was taken.

The descent into Refugio el Pilar is lovely and very runnable. Much more like we’re used to, apart from the heat, the altitude and the lizards.

But most importantly,  No regrets. It’s pretty simple. I met my match. I couldn’t beat the heat, the dust, the sand and most importantly, the mountain. I wasn’t good enough to do this. I had learned the difference between trail running and mountain running. That may seem quite simple, but it’s not until you actually experience it that you can truly appreciate what this sport is all about.

The best illustration I can give for the difference between this and the events we’re used to is that the South Downs 50 has 1750m of climb in 50 miles. This had over 2000m of climb in 15 miles and was around 70% on sand and very little downhill.

At least I had the balls and was daft enough to get out there and give this a go. Those are 2 character traits I’m very happy to have on my list, although I think that my mountain running career may already be over.

Having said this, I really would highly recommend this race, or at least one of the Transvulancia options. It does come in half marathon, which ironically is the course that I completed and there is also a marathon. This can also be done on a budget. Flights are direct from Gatwick, accommodation is pretty cheap and it’s not expensive when you get here.

The whole experience is amazing. The island is beautiful. The people are a very proud island nation and they love runners coming to their paradise to tackle their race. They have a huge focus on conservation. The beaches and countryside are very clean and the race provides group transport around the island to avoid cars filling the roads.

Thank you to Transvulcania and the people of La Palma for making us so happy and welcome. We will miss your black sand beaches, the rocky coastline, the constant companionship of lizards, the crazy roads that follow the contours of the coast, the deep gorges that we explored, the banana plantations and the vineyards, the lovely food and drink, and finally, we will miss being part of this amazing race.

You helped us to create some special memories and no hill that I ever tackle in the future will ever seem as tough.