It’s held on a cider brewery.  Where else?  It’s in the wonderful Dorset countryside.  Where else?  It’s full of people up for a giggle and a lot of running around fields.  What else would you expect?  OK, there’s a music festival just down the road and the Race Director has laid on a free shuttle bus and got us free entry.  Not bad eh?

The Cider Frolic is a 12 hour race.  You can run/jog/walk/crawl in relay teams of 2, 3, 4 or as a solo runner.  As long as you complete one 6.2km lap you get a lovely medal (what else would you expect?) (I must stop typing that now).

This is the view from the camp site at 4.30am on Saturday morning. 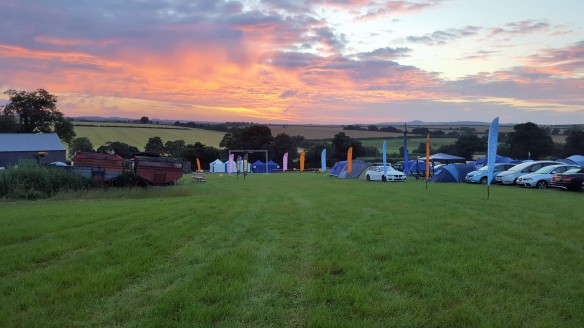 Not bad eh?  I don’t remember too many finishing straights like this over the past few years.

The reason I was up taking pictures at that time of the morning is that I don’t sleep too well in a tent.  The mixture of the heat, the sound of farting, snoring, people having a giggle and then the birds waking up did for me and I thought I’d go for a sunrise walk.

The race starts at 8am and Andy gives the race brief.

Now, at all White Star relay events, the baton is a squeaky rubber animal.  We’ve had a chicken, then a cow and this time it was the turn of the flying pig.  The squeakies are a story in themselves.  Each month before the race we get a running commentary from Andy on Facebook about his battles with Chinese suppliers, TNT and various customs authorities around the world.  But they were there and made a noisy appearance at the start of the race as the trumpeter signalled the start of the fun.  Oh and there’s fancy dress.  Lots of it. 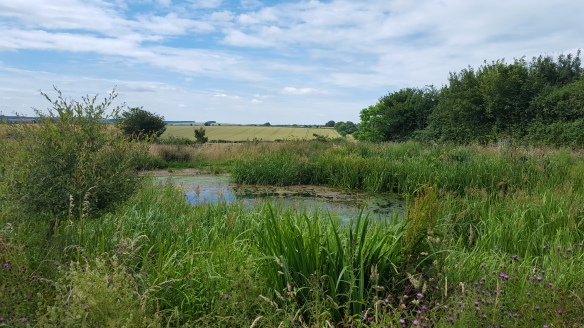 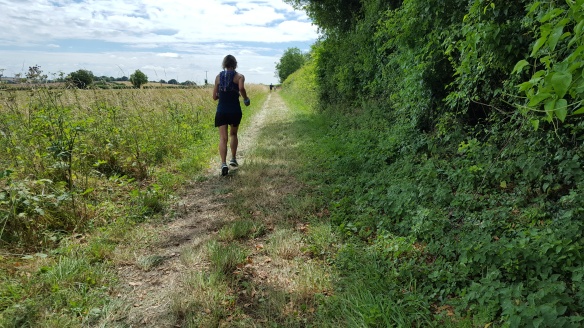 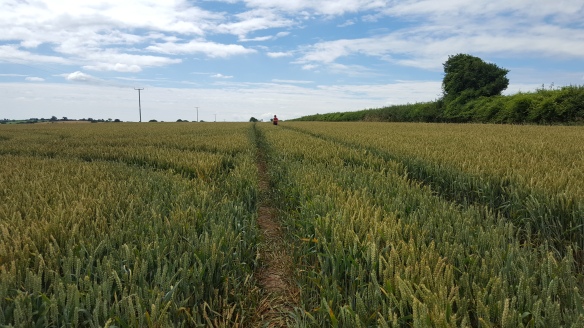 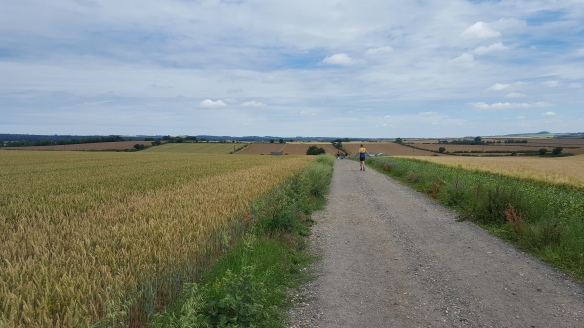 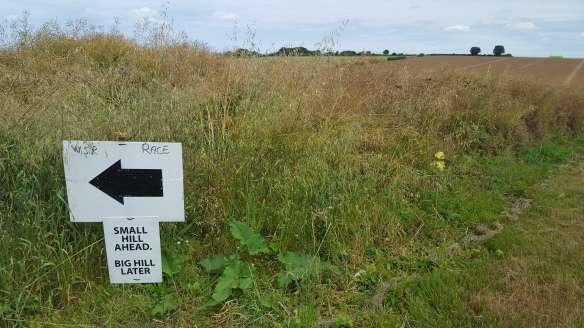 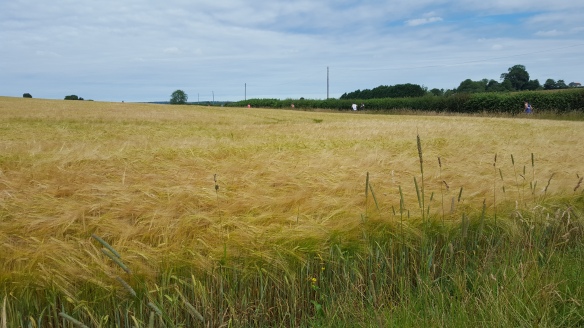 It’s very pretty.  Very dry.  You can see runners on other parts of the course at most places on the route, which is nice.  The hills are not too tough.  Apart from Bad Cow, I would say that the hills are more forgiving than at any other WSR race.  As you can see, it is certainly a bit up and down.  Not much chance to get a rhythm.

There were 2 things that weren’t quite so forgiving though.  The terrain under foot was really tough in places.  Quite rutted, especially between fields and towards the end of each lap.  You’ve really got to have your wits about you.

The other thing was the heat.  I’m not one of these people who moans when it’s 18 or 19 degrees during the summer.  I love that.  I can train, I can sleep at night and I can run races without feeling shite (see later).  I have no idea how some of the solo runners stayed out for 12 hours.  I had never planned on going longer than a marathon, but even if I had, there was no way that was ever going to happen in those conditions.

So, the race.  I set off slowly.  Walking up the hills.  Running slowly the flat and the downs.  Preparing the inevitable problems that the heat was going to cause.  2 hours 37 for the first half marathon.  I definitely did take the foot off the gas.  It was lovely.  I spent about an hour chatting with 2 ladies about all things running.  Coaching, club philosophy, ‘must run’ races.  One of them lived on my favourite training run back home. I also managed to have a chat with Tim who I first met at the Lemmings track marathon about 3 years ago.  It was the first time I’d seen Tim wearing a 100 Marathon Club shirt.  His achievements over the past 3 years are simply phenomenal.

I did then spend about 3 hours on my own.  This is not always a good thing.  I’m not really sure that it was yesterday.  My mind wondered (as it does).  It skipped between 2 things mainly.  The news came through on Friday that young Bradley had lost his fight against cancer.  We’ve seen him over the past year or so with his best mate, Jermain Defoe, leading out Sunderland and England.  Everyone was wishing he’d get better, but sadly it didn’t happen.  It’s not fair.

Something that has stuck with me recently is what Stephen said to me while pacing me on my 100.  We were having a pretty deep chat at around mile 60 and he said several times ‘we’re so lucky’.  It echoed so much yesterday.  We ARE so lucky.  Lucky to have our health, lucky to have friends to share this with, lucky to meet new people, lucky to visit such wonderful places and lucky to have the strength to battle when life throws a turd in our direction.

Towards the end of lap 6, around 23 miles, I started to hurt.  The heat was starting to get to me.  I had considered dropping.  The aim was to run a marathon and I would have considered not doing 7 laps as a DNF.  I arrived at the start/finish line and stopped for a drink and 2, then 3 of my club buddies offered to guide me round the last lap.  Bloody beauties.  They put up with me being a little grumpy and pretty sweary.  And that was it.  My slowest marathon ever.  I felt so crap on the last lap that I didn’t even have a cider on my last visit to the Lovestation (see later).

That wasn’t the end of it sadly.  I went to try to cool down and rehydrate.  When I stood up, it all went a bit wrong and 2 of my running buddies caught me before I hit the ground.  15 minutes later I was in the ambulance having an ECG.  The heat had well and truly got me.  I’m not sure what I did wrong.  I kept my usual salt and electrolyte regime (never had problems before).  I drank well at each aid station and I went much slower than I would normally do.  Maybe it just wasn’t enough and it was just much too hot.  Luckily, everything was back to normal in around half an hour.  I felt a bit crap for a while, but no harm done and my pee soon got back to a sensible colour (cooking lager rather than best bitter).  The paramedics were fantastic by the way.  One had even been looking into electrolytes and specifically how to deal with this type of situation.  It’s the first and hopefully the last time this will happen.

So, what else is there to say?

The Lovestation, that’s what.  The Lovestation is like no other aid station on the planet.  And on the lapped event you visit it on many occasions.  They have cake.  Oh yeah.  Lovely cake and lots of it.  If you made the vegan chocolate and raspberry cake, I want to hug you.  It was beautiful.  At the Cider Frolic the theme of the Lovestation was Fernando’s Bar.

There’s music, dancing, a glitter ball, water sprayers and cold sponge hugs.  And booze.  Beer, cider (it is on a cider brewery after all) and fruity vodka. 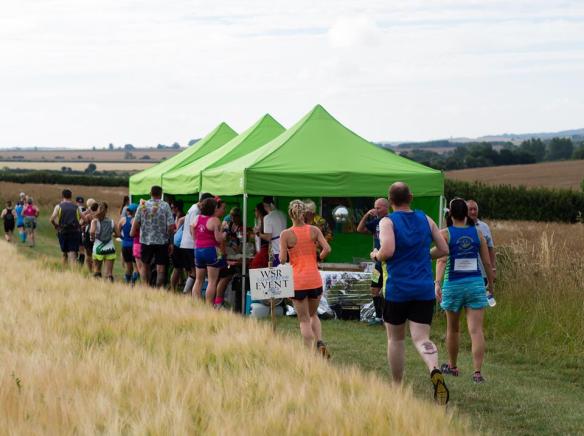 And finally, the festival in the village down the road.  Not content with running in some serious heat, we took the bus to the festival.  And there was a Ska band waiting for us.  And they were fab.  And we danced.

That’s it.  If you get the chance to do this race, do it.  It’s great.  Don’t make yourself poorly though.  That’s a bit rubbish.

Have fun folks, make the most of what you’ve got.  We live in a wonderful place, with wonderful people.  Surround yourself with them.

Thank you Andy, Badger (both of them) and everyone involved in making this weekend what it was. 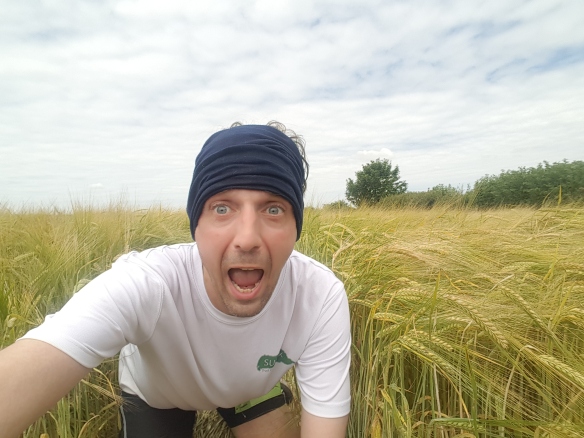